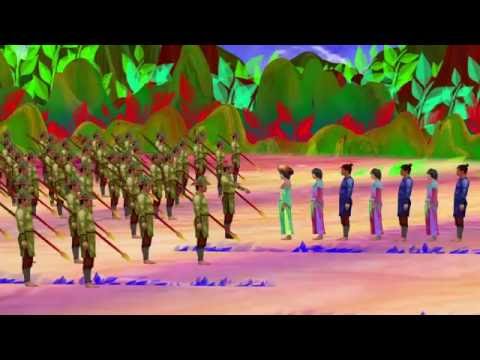 ***Scroll down for text of legend***
Standpoint Theories was founded by American dancer and choreographer Emily Navarra. Standpoint Theories has created 3 installments through collaborative and cultural exchange with 23 different artists abroad since 2012.

From 1820 – 1825, Xiem Army usually crossed the border to taunt the Vietnamese citizens. Every time the enemy came, the innocent citizens went for refuge up in the mountains. Once, the enemies made a trace to the peak of Sam Mountain, a mountain near the Mekong Delta – they saw the Goddess Statue there. They tried to uproot the statue by tying her with strings to lift her up with intention to carry her down the mountain to their country. But after a short distance the statue became super heavy and they couldn’t lift her anymore. One man in the troop got angry and stepped on the goddess statue which made a part of her left arm break off and he was immediately punished by her.

Later on she appeared and called herself Bà Chúa Xứ. She taught the villagers to bring her down to the mountain and make a shrine for worship. She then blessed them with pleasant weather, good harvest and helped to stop wars and fend off illnesses. Once the villagers understood her powers they discussed that they should go up to the mountain and bring her down for worship. But surprisingly, dozens of strong men tried to carry her but they couldn’t move the statue even a tiny bit. The people became disappointed and were about to give up but one girl entered in a trance state and informed them that she needs nine virgin girls to go up and bring her down the mountain. Along the way, before everyone reached the end of the mountain, the goddess statue suddenly became heavier and heavier and no one could carry her any further. Everyone came to the realisation that she chose this place, so they accepted this as a message from her and built a shrine at that very place.

***Legend Fun Fact***
The story states that under Minh Mang Dynasty, there was an Officer named Thoai Ngoc Hau who had the responsibility to protect Southwest border where had crossed over sometimes with the foreign armies. Before he entered any battle with his army, his wife, Chau Thi Te often prayed at Ba Chua Xu’s shrine, to bless him with victories in battles and to maintain a peaceful life for all citizens. Later on, to show her gratitude towards the wishes that came true, she ordered to build a bigger and nicer shrine for the goddess. The opening festival of the new shrine has been held for three days, April 24, 25 and 26 of the Lunar Calendar. Since then, it has become a tradition and the people take these three days to honour her.

***Lady of the Realm – Fun Fact***
Known as a protector deity. She is one of many goddesses who have grown popular in southern Vietnam since Doi Moi. For her followers, she can provide assistance for business success, health, fertility, domestic harmony, scholastic success, and divination of the future. Many female entrepreneurs will exchange money for her spirit money, which is said to accumulate wealth.